The Myth Of Moore's Law

One very good example of a reverse-engineered law (i.e. no law at all, but a presentation of what has happened) is the one called Moore's Law. From the evolution of this law, one can see how this type of laws are created: they are basically continuously modified to fit what has happened in the past. So they have actually very little predictive power in the long run. I believe many laws in economics are just like this one, but let me concentrate on this, because this is way closer to my circle of competence and work.

I absolutely admire what Gordon Moore and Intel has done so this article is in no way meant as attack against them. I don't know who have modified the law and when, but that does not matter in the end because the "law" now in circulation has very little to do with the original one. 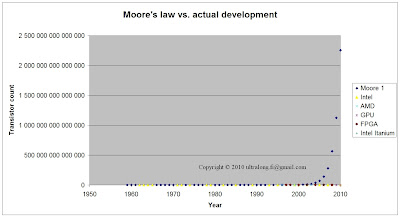 The original prediction (later titled Moore's law) was presented by Gordon E. Moore in "Electronics" Volume 38, Number 8, April 19, 1965 and this is the direct quote from that paper:


"The complexity for minimum component costs has increased at a rate of roughly a factor of two per year (see graph on next page). Certainly over the short term this rate can be expected to continue, if not to increase. Over the longer term, the rate of increase is a bit more uncertain, although there is no reason to believe it will not remain nearly constant for at least 10 years. That means by 1975, the number of components per integrated circuit for minimum cost will be 65,000."

So the original law calls for doubling every year counting from 1959 (1 transistor). As a reference, the Intel 8080 introduced in 1974 had only 4500 transistors and not 32768 as had been predicted by Moore. Intel managed to surpass 65000 transistors only in 1982 with Intel 286 that had 134000 transistors. Moore's law predicted 8,4 million so by now it was very clear that the original prediction was way off.

In fact, the law was fairly accurate only between 1959 and 1965. I.e. up to the point when the article was written. So it did not actually manage to predict anything right. Sure, the increase of transistor count has been incredible, but not as incredible as predicted by Mr. Moore back in 1965.

Because the original law predicted way too high growth rate, the "law" has been adjusted as follows:

"The number of transistors that can be placed inexpensively on an integrated circuit has doubled approximately every two years." [source: Wikipedia] 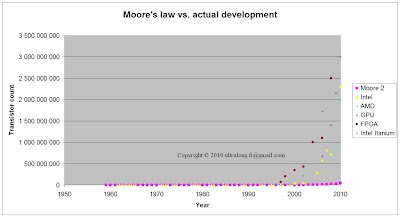 You can see for yourself how accurate that law is. It basically grossly understates the development. According to this Law #2 there should have been only 32768 transistors back in 1989, but Intel managed to put 1,2 million transistors into Intel 486. So c'mon this law does not work either if it starts in 1959.
Because even this adjusted law (#2) is not accurate, a third modification has been made to reset the law basically early 1970 to first Intel chip (Intel 4004 introduced 1971). Now this law #3, is somewhat accurate description of what has happened, but it has absolutely nothing to do with the original prediction. 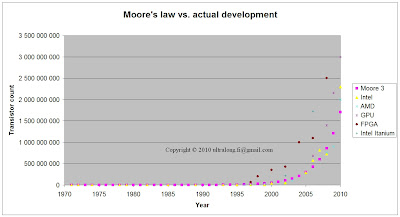 And like law #2 it too falls short. It predicts 1,7 billion transistors whereas Intel 8-core Xeon Nehalem EX has 2,3 billion and NVIDIA GF100 has 3 billion transistors. But hey, let's call that a rounding error in the law. It's really amazingly accurate if you use logarithmic scale that hide the "small" differences of, say, 1,3 billion transistors that is roughly the same as the high end chips had in total ín 2008 (NVIDIA GT200). 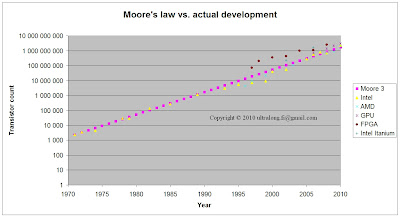 The increases in clock speeds and transistor counts have been truly amazing. My first computer was Commodore 64 back in 1984 and in my wildest dreams I could not have imagined the awsome power that I can harness today from my PC and the amount of data I can store. However, there have not been nor will be any hard laws of progress behind this and nor there will be. I laugh every time I see Moore's Law and it's awsome predictive powers referenced. At that is often. 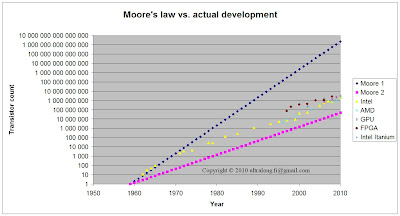 Masters of Science (Technology) degree from Helsinki University of Technology.

With the described portfolio of financial instruments, the author is willing to take much more risk than what is generally recommended even for experienced investors.

Due to Nordic model implemented by Finland the author does not (and can not) risk his work-related pension savings, education of his children or family healthcare.

The information provided in this blog is for informational purposes only and is not intended as investment, financial or any other kind of advice.

The author does not make any recommendation or endorsement as to any investment, product or service or to any material linked to this blog. Neither information, nor any opinion contained in this blog constitutes a solicitation or offer by the author to buy or sell any securities or other financial instruments.

Statements or comments made in this blog are merely opinions. Readers are advised to conduct their own independent research into individual stocks before making a purchase or sale decision. Additionally, readers are advised that past performance of the financial instruments discussed is no guarantee of future price appreciation.

This blog contains links to other websites which are not under the control of and are not maintained by the author. The author is not responsible for the content of those sites. The author provides these links for your convenience only but does not necessarily endorse the material on these sites.

The information provided in this blog is not intended for distribution to, or use by, any person or entity in any jurisdiction or country where such distribution or use would be contrary to law or regulation.